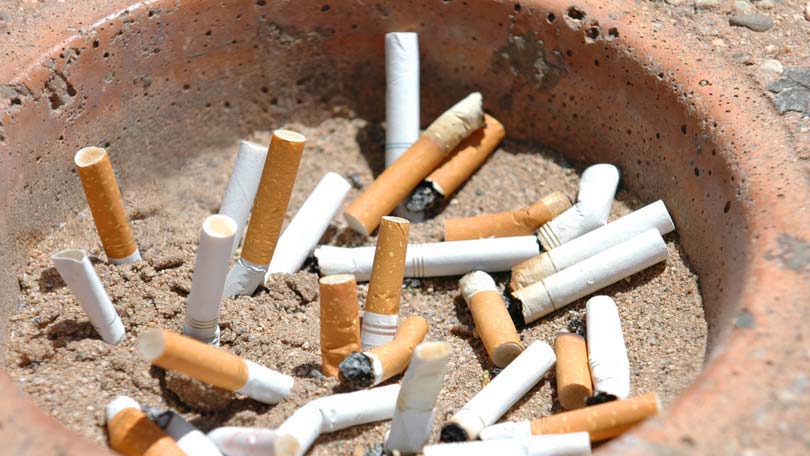 Smoke, which is a combination or mixture of gases, organic compounds and particulate matter, causes plants to drop leaves and causes epinasty, which is a downward curvature of leaves, due to its ethylene content. Ethylene causes lateral swelling, reduces the elongation rate and, as opposed to normal vertical growth, causes horizontal growth in seedlings. Smoke often contains air pollutants like sulphur dioxide and nitrogen oxides that are also injurious to plants. Carbon dioxide in smoke is beneficial to plants, since it is used in photosynthesis, but the particulates present could coat the leaves and hinder the absorption of light.

However, there have been differences in the findings, with respect to the effects of smoke on plants. Pineapple growers used to make smoke producing fires near their fields in order to aid flowering in the plants. In ancient China, to ripen harvested fruit, it was a practice to burn incense in the rooms, where the harvested fruits were kept. The created heat and smoke helped in the ripening process. The traditional methods are still in use in many rural areas even today.

Research has revealed that plants absorb indoor air pollutants, though their effect on smoke absorption is not confirmed. It is generally found that houseplants are very effective in removing smoke and obnoxious gases from the atmosphere. The presence of carefully assimilated houseplants indoors definitely adds to the quality of air inhaled by the family, while enhancing the ambience.

When we buy new clothes and furniture, we bring chemicals and other substances into the house that give off harmful gases. In fact houseplants are helpers that work silently, in order to rid the air in the house from toxins and harmful pollutants, by counteracting, out-gassing and maintaining appropriate levels of humidity. But each plant can have an effect only within a limited area. The area that one plant can take care of is considered to be approximately ten square yards, where the average ceiling height would be eight to nine feet. Two or three indoor plants would suffice to maintain the air quality of a room having an area between twenty to twenty-five square yards.

Plants that are effective controllers of air pollution

Ten different plants have been found to be most effective in controlling the negative effects of gassed chemicals and help to balance internal humidity. It would undoubtedly be beneficial to have some of these in your house. The presence of the following plants definitely help in maintaining the internal humidity and contributing positively to the family’s health, while enhancing the beauty of the garden:

It is generally assumed that plants kept inside the house need to be placed near to or next to the window. It is not so and many indoor plants are initially from tropical forests, where there is dense shade due to the foliage. They have a high photosynthesis rate and can ideally be placed in the darkest corners of the room. To get the maximum benefits from the plants, it is important to position them properly. If indoor plants are place in the path of drafts, it affects their efficacy in countering air pollution. The placement of different plants should be different, according to the specific requirement of each species.

The result of extremely high levels of indoor-pollution caused by the new designs of super insulated homes and buildings is the buildup of ‘off gases’. Thee harmful effects of these gases are further aggravated by the presence of organic compounds given off by materials in daily use like cleaning compounds, building materials, furniture, fabric and cigarette smoke. All these materials add to the toxins in the air and result in a number of diseases.

The ‘sick building syndrome’ symptoms consist of typical allergic reactions like rashes, itchy eyes, sinus and respiratory congestion, drowsiness and headaches, resulting from working in new buildings where there is very little or no ventilation. The overall productivity of the employees is also affected, due to the poor working conditions.

NASA scientists conducted tests with many common houseplants grown in conditions very close to those in homes and offices for effective filtering of indoor air. They found after a two-year study that a dozen that were most effective were Aglaonema (Chinese Evergreen), Syngonium (Arrowhead vine), Dracaena (Cornplant), Spathiphyllum (Peace-Lilly) and Syndapsus (Devil’s ivy). These species have been proved by research, to enhance the air conditioning within the home or any enclosure. NASA is constantly conducting research to contribute positively towards the issues of global warming and pollution that threaten the world at large.

The Value and Purpose of Medical Coding Audits

How to Keep Your Company Culture Strong Through a Relocation?

How to Get the Most out of Your Luxury RV

Hardwood vs. Laminate Flooring – Which One is Better

When Is The Best Time to Exercise

Holiday Dieting Tips – Watching What You Eat While on Holidays