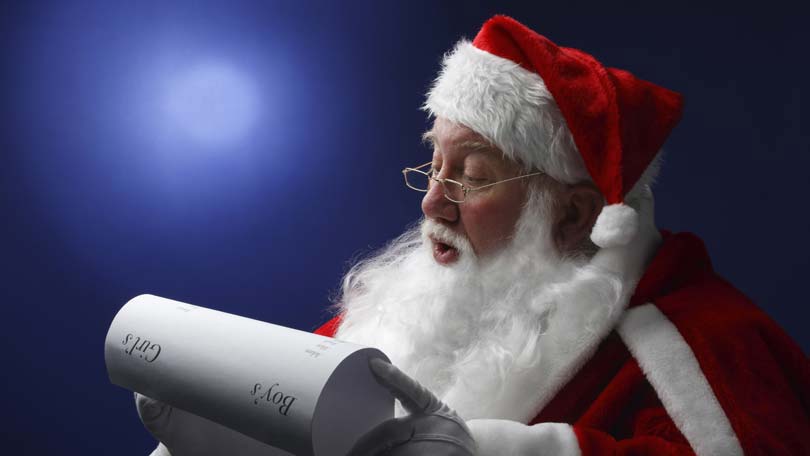 Each year, around this time, children sit down at the table and write a letter to Santa, providing him with a bit of insight into all the things they’d like to see under the tree on Christmas morning. These wish lists are often misspelled, endearing, and somewhat amusing to parents whose tots beg for things that they want as though the sky’s the limit. After the letters have all been written, Mom and Dad (aka “Santa’s Checkbook”) get to see how charitable jolly Old Saint Nick will “get” to be this year.

Of course, the Christmas wish list is very important! Parents get a chance to see what their children would be happy to get on the big day. The problem with the list is that many kids hope, or even expect, that they’ll receive every single item they’ve listed. Little do they know that Mom and Dad are simply formulating how they’ll afford at least some of what they’re kids want, and only hope they’re able to prioritize and purchase the gifts that their children most want to get. Oh, the stress of it all!

See, when kids are young, dolls, baseball gloves, toy guns, soccer’s balls, Nerf, etc. were all typically within the range of “Santa’s” budget. But starting around seven years of age, the “wish lists” begin to be enough to give Mom and Dad a stroke! The Legos they put on their Christmas list a few years ago were a mere $29. Well, now, that just won’t cut it. This time around they want the 31313 LEGO Mindstorms EV3, which just happens to be over $300. Luckily for you, your wonderful daughter (tomboy, aged 10) said she’d be happy with that since the PlayStation4 she really wants is even more expensive.  When you remind her how pricey her choices are, she says that they really aren’t…since they don’t cost anything…because Santa will bring them!

That’s the one major problem with allowing your kids to “believe”. We want to give them the best childhood they can possibly have by allowing the fantasy of Santa, the elves, etc. to be something they look forward to each year, but man, it’s costs a pretty penny to do so! Gone are the good old days of kids being happy with an orange and a few pennies in their stocking on Christmas morn. Kids these days have sophisticated taste and they’re not afraid to ask for the world.

And the world we now live in has very much become an “indoor” one. We’d rather sit inside and stare at screens than live life recreating in the great outdoors. Unfortunately, screens cost an arm and a leg, and happen to become outdated almost as fast as we acquire them. Kids spend so much of their time on phones, tablets, TVs, readers, hand held gaming devices, etc., that they rarely ask for much else on their Christmas wish list. $$$!!!

Is it not time to let kids know that sometimes, Santa is facing a recession, or that their choices are simply insane?! Asking for $300+ gifts is just plain nuts! I think it would be great if Santa would put out a press release and let the world (and especially our greedy little monsters) know that this year, and possibly every year for the next decade or so, that a recession will be hitting the North Pole. Due to layoffs, binding arbitration with Rudolf and the other moneygrubbing little reindeer, increased sick day pay to the elves, etc., Santa can’t deliver the way he used to. Alas, the wish list needs to become more realistic.

But, how do we make our children understand that the mythical and magical man in the red suit has fallen on hard times? Isn’t the entire point of the Santa “fantasy” that by being good, we can have everything we want in life? How do you explain to a child that despite all their hard work towards being a fine, upstanding citizen this year, that Santa just can’t reward them the way he’s supposed to? What’s a parent to do?

Keeping “the secret” while at the same time being practical and sensible is a balancing act every family has to achieve. Kids are only young for what seems like a few short minutes in the big scheme of things, and we want them to believe. But, we also don’t want them to become greedy, shallow, materialistic consumers who think the purpose of life is acquiring any and every thing that catches their eye. This is especially true considering most kids lose interest in their Christmas gifts a few months, if not weeks, after the season has passed. Nothing is more frustrating to a hard working parent than seeing all those expensive gifts flung into a forgotten pile before their shine has even worn off.

Christmas should be a joyous time, however, thanks to advertising by big corporations, it’s become extremely expensive and is slowly depleting Santa’s collective bank account. Though it may not help Santa this year, perhaps he should just give out free Netflix to all the Moms and Dads of the world. This will ensure our wonderful children won’t see ads for things that “Santa’s Helpers” can’t afford next year. Perhaps he could throw in some ad blockers for the computer while he’s at it!

In the end, just remember that playing Santa is a relatively short phase in your life, and you’ll be sad when it’s finally over. Once your kids “find out”, they’re a little more cynical and a little less enamored with the Christmas season. Yes, Christmases during your children’s younger years may practically break the bank, but one day soon you’ll miss perusing those scribbled Christmas wish lists. Your moody older children will make you wish for their earlier days of wide-eyed wonder when everything seemed possible to them and they truly believed they could have the world itself if they just asked Santa for it. And that innocent attitude is priceless.

Games That You Can Play on the Go

You Had the Best of Intentions

Growing Cucumbers – Ready to Harvest in 48 to 60 Days

- August 20, 2019 0
Cucumbers are a favorite in the summer because of their light, refreshing taste. With a few handy tips, y

Battling A Legacy of Depression With A Spoonful of Health

How to Remove Sweat Stains from Clothing