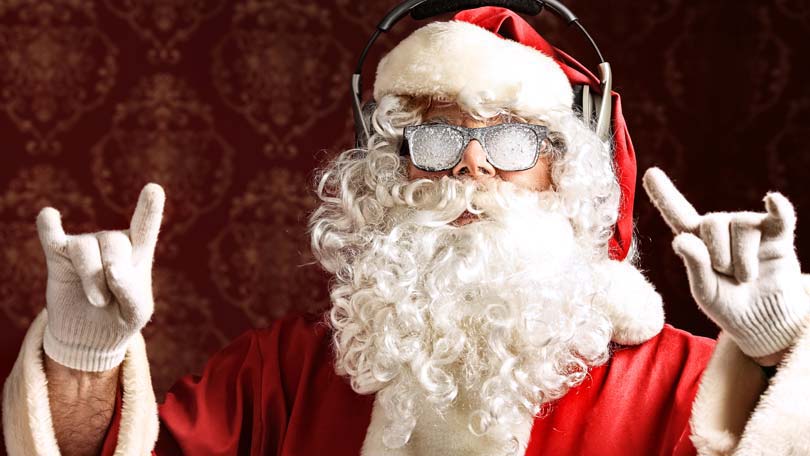 There comes a time in every child’s life when he starts to question everything he’s ever been taught by his elders. In particular, kids begin to doubt how real certain fantastical characters such as the Easter Bunny, Tooth Fairy, and yes, even Santa Claus are. The seeds of doubt can be planted in a variety of ways. A “mean” older sibling or a classmate who wasn’t raised to believe may be the first to break the bad news. Other kids may pick up on the unlikelihood of Santa being able to be present at every mall, street corner, and parade in the country at the same time.

My oldest daughter found out young. She was probably six- or seven-years-old at the time and a well-meaning friend mentioned that she herself found out that the Tooth Fairy was fake at a young age while my daughter was, unbeknownst to us, standing in the room behind us. My daughter looked at me with disbelief and she and I both started crying that her naivety had been dashed prematurely. My friend, for what it’s worth, could not stop apologizing for revealing the truth.

My middle daughter was around nine-years-old when she found out courtesy of my first born. She was nonplussed and moved on without suffering any bad feelings over the matter. Her apathy was oddly comforting to me.

My youngest, who’s currently 10 years old started to get suspicious for the first time this year after hearing “I Saw Mommy Kissing Santa Claus” on the car radio. I peeked at her tiny face in the rearview mirror and could see the wheels turning. She asked me if Santa was really Daddy and then before I could answer declared that, yes, that must be it. She then accused me and my husband of being the ones who bought/brought the gifts on Christmas Eve.

And here started my moral dilemma. Of course she was right, and I’d spent her lifetime enforcing the idea of honesty being the best policy. Always tell the truth. Never lie. But, innocence fades so quickly, especially in our social media-obsessed society where everyone knows everything whether they want to or not. And she’s my youngest kid. Her knowing the truth would sadly mark the end of the era of my kids being kids and none the wiser.

Instead of admitting that she was correct, I chickened out and changed the subject. I’m just not ready to burst her bubble. And maybe she can sense that and doesn’t want to burst mine either by telling me that she actually does know the truth. Her sisters get upset with me and urge me to set her straight simply because they’re sick of living the charade themselves. I tell them to hush up and threaten them with punishment if they ever let the cat out of the bag.

To make matters worse, my husband and I go out “Christmas shopping” a lot this time of year now that my teenager is old enough to babysit her sisters. In reality, we just go on a date with each other, but my youngest has asked about this too. She wonders why we need to go Christmas shopping if Santa’s the one who delivers the goods. I answer with yet another falsehood saying that he brings some gifts while we give others. Lies. Lies. Lies. There’s a big box full of presents in my closet that I told the kids to stay away from and this just makes things more confusing for my baby daughter.

I’m guessing this will be the last year that we live this life of deception. I honestly think she’s got it figured out and next comes Easter as well as losing one baby tooth after another. She’ll ask about the Bunny and the Fairy too, no doubt. I picture myself breaking down and admitting the truth sooner rather than later. That mixture of sadness, guilt, and wistfulness flooding through me for the third time in my parental life. I hope she’s easy on me when it happens. After I come clean, I’ll tell her what I told my other two daughters.

Santa is indeed real. No. Not one guy who miraculously travels around the world in one night delivering gifts to millions of kids, but the concept of Santa is alive and well. That the reason we’re all really here is to serve and love. That it’s all about the give and not the get. That they call it the most wonderful time of the year for a reason. Because we’re all idealists in December. We’re all abuzz with hope and positivity and enthusiasm for all that’s good and right with the world. That if we had a hard year, it’s almost over and will end in the warm glow of Christmas cheer preparing us to face the fresh start ahead.

That it’s okay to believe in fantasies. From the time our kids are little we enrich their lives with them. Princesses, fairy tales, dragon slayers…we do all we can to stimulate our offsprings’ imaginations and let the sky be the limit as far as creativity goes. Why stop at Santa and his fellow holiday mascots? Daydreaming and fantasizing can make life liveable when things get tough. I say we encourage those things.

As for my youngest daughter, I’ll let her decide when she no longer “believes”. I certainly won’t be the one to sit her down and tell her that we’ve lied to her all along and that now it’s time to grow up and face reality and to let go of that sort of nonsense. As for you and your kids? Only you can decide when the time is right to tell your kids about Santa. And only you can decide how to explain why you never told them to begin with. And I hope that every kid can understand that their mom and dad always have their best interest at heart in every parenting decision we make. Even the lies.

Why Do People Choose a Career in Beauty?

The History of Candy Canes

Mattress Buying Guide – Things to Keep in Mind When Buying...

Reasons to Be Thankful This Thanksgiving

Lauren MJ Connelly - January 1, 2020 0
People do some pretty strange things at different times, even when it comes to their health. When we get

A Quick Trip for New Parents

How to Clean The Hardest to Reach Spots in Your Home