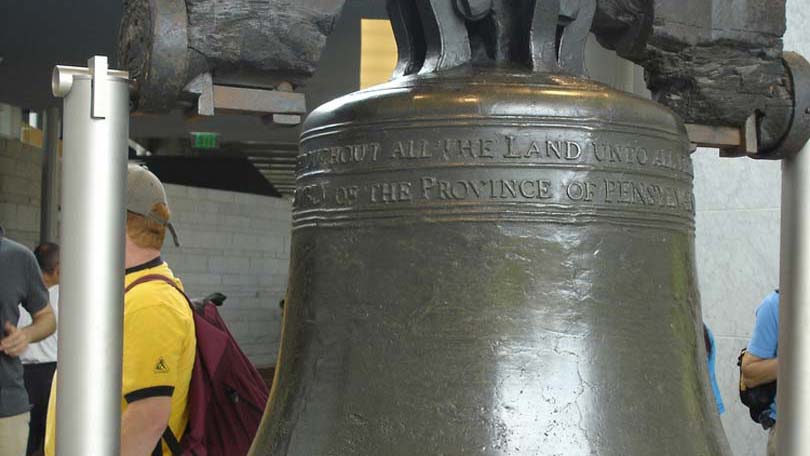 Originally dubbed “The City of Brotherly Love” and more recently “The City that Loves you Back”, historic , Pennsylvania is one of the most popular tourist attractions on the East Coast of the United States.

Steeped in early American history, yet family-friendly enough to be enjoyed by all ages, Philadelphia has it all, including not only colonial history attractions but also excellent museums, arts and music venues, sports teams, national parks, and much more.

Because of its location, Philadelphia experiences all four seasons – winter, spring, summer, and fall. That can mean extreme temperatures at certain times of the year. For example, July and August can get quite toasty, but still remain the most popular tourist months for families traveling with children.

If you’re considering heading to the city during your winter break, be prepared to bundle up. While the winters are moderate compared to cities further north, there’s a potential for snow and frigid weather.

By far, the most wonderful time to visit Philadelphia is in the spring or fall. During either season, the city is alive with color and the temperature is perfect for walking, which you’ll be doing a lot of during your tour of this beautiful city. Some attractions may be open shorter hours during these seasons, but with a little advance research, you can plan accordingly.

Ask most travelers why they’ve come to Philadelphia and they’ll inevitably cite the city’s rich history and its connection to the birth of the United States. Philadelphia is often referred to as “The Cradle of Liberty” and one experiences goose bumps when they stand where the American forefathers stood centuries ago, making decisions that would affect the lives of Americans far into the future.

If you’ve come for the history, start with Independence National Historic Park. Overseen by the U.S. National Park Service, this area consists of a number of sites connected to the American Revolution and the birth of America. Start your tour with a stop at the Independence Visitors Center, where you can grab some brochures, use the rest rooms, and pick up your free tickets for a tour of Independence Hall.

At Independence Hall, you’ll see the Assembly Room where the Declaration of Independence was adopted on July 4, 1776, where the design for the flag was agreed upon in 1777, and where the Articles of Confederation were adopted in 1781, and the U. S. Constitution was drafted in 1787.

Head across the street and get in line to view the famous Liberty Bell(no ticket necessary), an international symbol of freedom. Learn about the bell and how it got its famous crack.

Just a block away is the National Constitution Center, one of Philadelphia’s newest attractions, helping visitors understand not only the history of the U.S. Constitution but its relevance in today’s society. Kids will especially enjoy the interactive exhibits found here.

Ever wonder how coins are made? Head across the street to the U.S. Mint, one of just a handful of Mints located throughout the United States. A free self-guided tour with narration helps you understand the process of minting coins and gives you insight as to the history of certain commonly-used coins. Children and adults alike are fascinated by the machines that produce these shiny treasures! (Tip – Cameras are not allowed inside the Mint and no lockers are provided. If you want to tour, leave your camera elsewhere.)

Other notable historic attractions include Christ Church, an Episcopal house of worship where most early Philadelphians attended church, including George and Martha Washington, Benjamin Franklin, Robert Morris, and Francis Hopkinson. The burial ground contains the graves of Franklin and his wife in addition to those of other famous colonial figures.

Also include a stop at Franklin Court, for more insight on the life of the eccentric Benjamin Franklin, and take a walk down Elfreth’s Alley, a national historic landmark and the nation’s oldest residential street! Across the street from Elfreth’s Alley is the Betsy Ross House, where the famous seamstress fashioned the first American flag.

Philadelphia boasts a number of museums that could take days to explore, but a few are definitely on the must-see list.

The Philadelphia Museum of Art is one of the best and largest of its kind in the country. Founded in 1876, the museum has a permanent collection of more than 225,000 pieces of art, ranging from paintings and sculpture to armor, pottery, tapestry, and furniture. Since the 1970s, the museum has also been well-known for its role in the “Rocky” movies. Being able to run up the tall Art Museum steps was Rocky’s goal in the first installment of this series. A statue of the movie character now sits outside the museum.

For families traveling with children, a stop at The Franklin Institute Science Museum is a must. The original institute was founded by Franklin himself in 1824 but the current museum opened in 1934. Kids will enjoy a wealth of hands-on exhibits including a walk-through heart, a real steam locomotive, airplanes, a great exhibit about lightning, and much more. Lots of special traveling exhibits stop at the Franklin Institute as well and there’s also an IMAX theater and a great Planetarium.

If you’re traveling to Philadelphia during a warmer time of the year, take a day to visit the amazing Philadelphia Zoo. The oldest in the country, the zoo opened in 1874 with a little more than 800 animals. Today, more than 1,600 furry, slimy, and winged friends call the zoo home and more than 1 million visitors enter its gates each year.

Philadelphia is also home to two excellent musical venues that are nationally renowned. Opened in 1857 and continuously lauded for its incredible acoustics, the Academy of Music is the oldest grand opera house in the nation still used for its original purpose. Visitors can enjoy performances by the Philadelphia Opera Company, the renowned Pennsylvania Ballet, and the Philly Pops Orchestra at the Academy. A series called Broadway at the Academy also presents a season full of great Broadway musicals.

The Kimmel Center , the newest addition to the Philadelphia arts and culture scene, opened in 2001 and cost $235 million to build! This concert venue, which occupies an entire city block, is home to the famed Philadelphia Orchestra but also hosts a myriad of other music, dance, and theatrical events.

7 Steps To An Organized, Good-Looking Kitchen

Budget Clothes Shopping – How To Get Deals on Jeans &...

- August 19, 2019 0
Nothing is worse than when your favorite hoodie shows signs of wear and tear and not in a cool distresse

Open Storage in the Kitchen