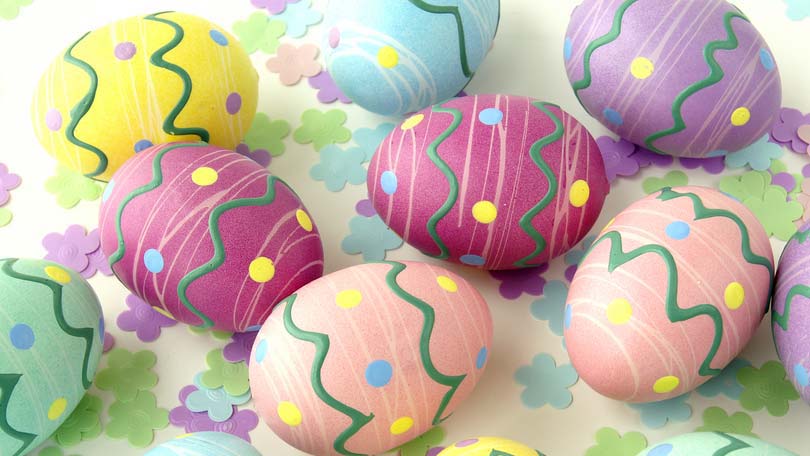 If you dip a hardboiled egg in vinegar and food coloring in the middle of December, is it still an Easter egg? Why do we hide them, paint them, and eat them— even when the coloring has leaked through to the egg? The Easter egg is one of those widely accepted Easter traditions that seem to have nothing to do with God or Jesus or the resurrection or any religious meaning at all.

Before there was an Easter, or even Christianity, or even a Christ, there was an “Easter egg.” The Passover Seder revolved around a hard boiled egg that was then saturated in sea water to flavor it with salt as a customary symbol of fertility and servitude to the Temple in Jerusalem.

Some people attribute the Easter traditions that we celebrate to Paganism and their rites of passage and re-birth in the spring while others remark that it was Mary Magdalene that presented the first Easter egg after Christ’s resurrection, painting it red to symbolize the blood of Christ. Either way, the egg represents life, newness, the ability to break from a living death and become a spirit of wholeness and honor. The egg itself has always held a place of honor among Jews, and for as much as we take it for granted, in our modern everyday life as well. All life starts with an egg.

This may all be a little heavy for your three year old as he is running around in search of the elusive twelfth egg, but the tradition itself carries its meaning in children often without needing explanation. Children are naturally inclined to make annual announcements, as in, “next Easter I am going to,” or “by next Christmas,” as methods of estimating time. As one holiday or special event comes to a close, newness opens up to them. They make these assumptions rather quickly and conveniently and often even have the follow through to remember at the next holiday. This is because holidays and birthdays are natural time markers for children.

Of course they are uniquely unaware of their wisdom as they run around hunting down the brightly colored eggs they so delicately (or not so delicately) painted with anticipation. They are simply having fun, whether they are gathering at their own pace at Grandma’s house or participating in a contest, Easter eggs bring children great joy and encourage their imagination.

A creative inventor came up with an Easter egg that emits sounds to allow the visually impaired children of the world to participate in this timeless tradition. In fact, there are Easter egg creations for the visually impaired, the physically disabled, and the mobility challenged, some designs as simple as a Velcro or sticky backing to allow the Easter bunny to hang the eggs up at a higher level.

So, if you dip a hard boiled egg in vinegar and food coloring in the middle of December, is it still an Easter egg? The representation of life, new beginnings and re-birth is not consolidated to any given day of the year. These emotions, inspirations, and natural occurrences in our daily lives are a gift regardless of the time of year the calendar dictates to us. Thus, an Easter egg is an Easter egg all year long. And if you break out the Easter egg coloring kit two weeks before Christmas, you may get a very unique opportunity to explain to your children what an Easter egg really means. There will come a day that they are too old to run around the back yard in their special little brand new Easter outfits tracking the Easter bunny. They will never be too old for a new beginning, re-birth, or the affirmation of the glory of life.

What to Look for When Buying a Mattress

Everything You’ve Ever Wanted to Know About Fruit

Eating what we Need Versus what we Think we Need

How Does Health Insurance Work for Families?

How do You Clean a Leather Sofa

The Best Easy-to-Grow Flowers for a Gorgeous Garden

10 Perfect Outdoor Activities To Do In the Summer

- January 29, 2019 0
Summer is the best season for getting outdoors and going on adventures. Even with blazing temperatures ab

Keep Your Kids Home if They Are Sick