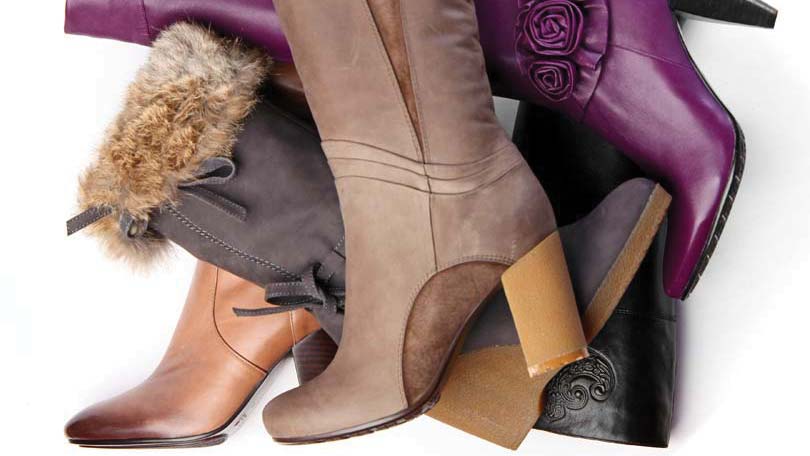 Recently, there have been some websites that have mimicked the idea behind “cake of the month” and replaced truffles with something even more addicting. Shoes. Yep, that’s right. For a sheer $39.95 per month, you can get a new pair of high style shoes delivered to your doorstep each and every month over the course of a year. Plus, if you look through the catalog and spot another pair of fashionable boots that you don’t think you can live without – your “club” enables you to buy them without reaching deep into empty pockets. Perhaps the funniest thing about this new style of mail order happiness is that the businesses are booming and Facebook is a flutter with female fans sharing their monthly shoe fetish with friends and family. And why not, they get a bonus pair of shoes for every potential femme shoe buyer that they refer.

So, how many shoes does a woman really need?

Many decades ago, women (and men) pretty much had one pair of shoes that were designed to not only support the foot but also to last the course of a year. If you were doing well financially, you had maybe two to three pairs of shoes. Shoes back then were made of leather (and by hand) and were not designed with fashion in mind. If you go back to your parent’s generation, the average pairs of shoes owned by women were 3 pairs. 20 years ago, women owned around 3-5 pairs of shoes. Of course when women officially hit the professional workforce, the shoe industry experienced one of the highest growths every recorded and shoes started becoming more of a fashion statement than a necessity. Even in recent years with the recession, show purchases among women alone equaled an estimated 42 BILLION dollars per year.

Today, a Reuter’s poll shows that most typical middle class women proudly own at least 19 pairs of shoes. 19, doesn’t sound so bad does it – especially when you consider having a pair of shoes in every color to match your outfits. Plus, you need shoes to work out in and enough pairs of flip-flops to make those pedicures worth the money. Yet the same poll also indicated that around 60% of the average female population owned around 30 pairs of shoes and many own hundreds of not several hundreds of pairs of shoes. The worst part is that on average most women admitted to only actually wearing 4 different pairs of shoes per year. Still those stilettos, sling backs, boots, and flats sit happily in the closet and are admittedly a result of impulse shopping.

Around 7 out of 10 women polled admitted to hiding the shoe purchases from their mate, because they knew at the gut level that they already had too many pairs of shoes. Yet, this guilt doesn’t stop them from buying more. Why? Psychoanalysts say the reason is pretty straightforward. Shoes, unlike clothes, fit well. A woman can go into a store and try on a pair of shoes without feeling guilty about gaining a few pounds or experiencing the stunted self-confidence that results from realizing that they cannot button up a pair of Size 10 jeans. On the contrary, the shoes always fit. And, for many women conditioned to doing for others, a shoe purchase is something they can justify as ‘just for them.’

Plus, with shows like Sex and the City, and even makeover programs like What Not to Wear women are becoming increasingly aware of the power of shoes. Let’s be honest, the sex appeal of a woman wearing black stiletto heels is undeniable for both sexes.

The medical term for people addicted to shoe shopping (and buying) is omnio-mania. The Greek word translates literally to shopping insanity and afflicts an estimated 31% of the female population. Sadly, if the woman in your life has too many shoes it could signify an emotional or psychological problem, especially if this shopping habit stresses the budget or takes precedence over more important financial responsibilities. Psychologists also link excessive shoe buying back to childhood feelings of not feeling supported or taken care of by their parents. The larger issue of excessive shoe compulsions also is evident in theories of consumerism, where having more is often seen as a measurable way to move up the social ladder.

Additionally, considering the fact that women are willing to jeopardize their health and endure bunions and blisters (and are the number one suffers of health problems related to ill fitting footwear) in order to wear stunning shoes – it seems relevant to surmise that women and shoes often go together as happily as peanut butter and jelly.

And then of course, there is another reason. Perhaps some women just love shoes and just love being able to style up their wardrobe by having the abundant option of pairing their favorite jeans with red cowboy boots, heels or a pair of humble ballet flats depending upon their mood.

How many shoes does a woman really NEED? If you are bartering the subject of needs versus wants, the answer would be dependant upon lifestyle and climate. Seemingly, any person could get away with wearing one pair of tennis shoes all year long with every outfit. Add a pair of flip-flops and some black flats and seemingly, she would have adequate footwear to pertain to any occasion. Yet, try to explain this to your wife or girlfriend (or daughter) and chances are she would be hard pressed to believe it. After all, life is definitely better with gold cowboy boots!

Does Fabric Softener Break Down Clothing?

CBD and Effectiveness: What’s the Best Way To Consume?

Am I Obese – Find out by Calculating your Body Mass...

24 LIFE HACKS FOR KIDS AND THEIR PARENTS

What is Palm Sunday – Celebrated Differently by Each Denomination

- June 15, 2019 0
When I was a kid Palm Sunday was that day in church that those big leafy fauna things were handed out and

Buying Kid’s Shoes – What you Need to Know

3 Ways to Keep Kids Safe in the Age of Social...

Bathroom Etiquette 101 – The Unofficial Rules of the Bathroom