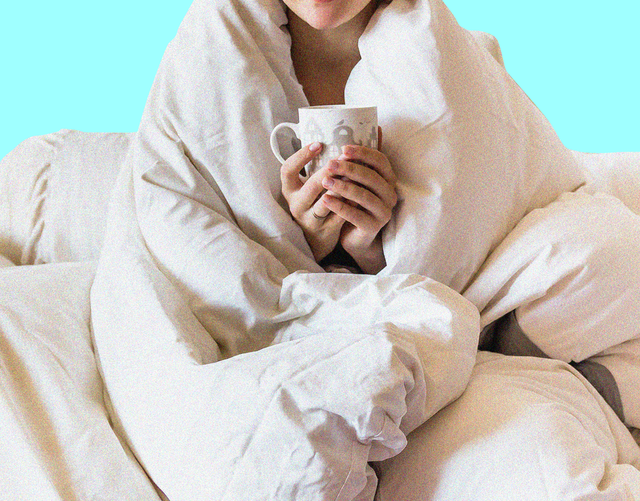 Do you snuggle up with extra blankets even on a hot summer night, or consider sweater weather a year-round season? If that sounds familiar, you might also recognize these symptoms: you regularly get shivering spells, icy fingers and toes, and feel like you’re freezing all the time (regardless of the temperature, and for no reason!). Experts at Harvard Medical School have indeed established that body temperatures shift during the day, but some people always feel cold — and it’s not something you should ignore.

Reminder: Consult your physician right away if you’re experiencing cold intolerance as it could be a underlying sign of a major health issue.

The human body temperature is actually decreasing, believe it or not. Since the 1800s, we’ve considered 98.6°F the standard. But new journal research published in eLife in January found that body temperatures tend to be closer to 97.9°F. Research also shows that women usually feel the chill more than men, because females can sometimes have a lower metabolic rate than men, meaning they burn fewer calories at rest and generate less heat, says Peter Bidey, D.O., the Philadelphia College of Osteopathic Medicine’s Vice Chair for the Department of Family Medicine. Research published in the journal Nature Climate Change in 2015 found that the most comfortable room temperature for women is 77 degrees, while men prefer a cooler 71.6 degrees.

Feeling super cold occasionally or just on cold days is nothing to worry about, Bidey says, but once it starts to interfere with your daily routine or occurs with other symptoms, it’s a different story. “If you’re feeling really fatigued on top of [being cold], or if you see changes in your hair, get short of breath or dizzy, start having changes in your bowel habits, with a combo of generally feeling really cold, you should probably go see your physician,” he tells Good Housekeeping. Below, we explore some of the reasons you may feel cold more often than not.

admin - November 1, 2020 0
Getting diagnosed with a lifelong chronic illness can be a huge shock—and the surprises will likely keep coming as the patient journey continues. Here,...

The 16 Best Bathroom Plants for a More Spa-Like Experience