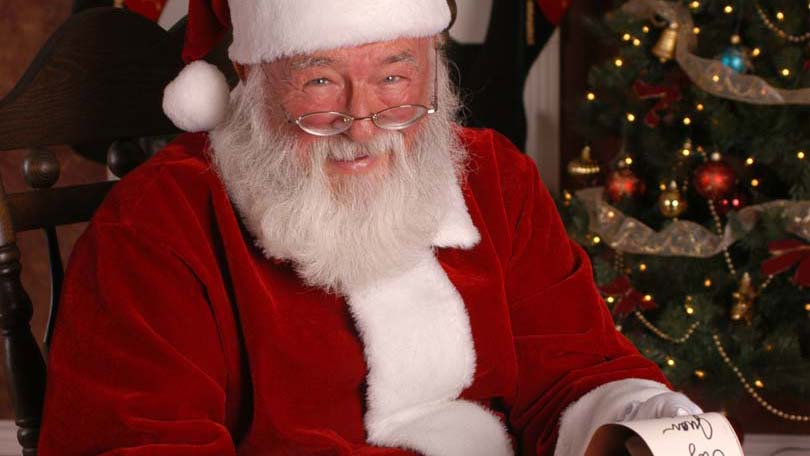 There she stood. 4 years old, with her hair up in pig tails, a red taffeta dress and a sparkle in her eyes that only belongs to the young. Her older sisters at her side, coveting the mystical magic that she was experiencing seeing Santa for the first time. They prodded her forward, urging her to take the red and white candy cane from his gloved hand, just as they did when they were 4. The older girls, at 14 were too old now for what they saw as ‘childish things,’ yet wished somehow from the depths of their hearts, that they could travel back in time and be 4 again, just so they could still believe. So they could grab the candy cane and feel the electricity of Santa’s hand touching theirs.

Their mom still put out reindeer food each and every Christmas Eve, still forced them to spend a day baking cookies to leave out for Santa (that always seemed to get burnt) and did her best to hide the presents and the worried look on her face about how she was going to afford Christmas for all these kids. She never came right out and told them that Santa didn’t exist. But they knew. In fourth grade, one of the obnoxious children at school started blurting out insults to anyone who still believed. He was a magic thief, rebelling against the fact that someone had already ruined it for him. Like most things kids seem to find out too soon, the knowing is accidental.

When they asked about it that night, mom told them he was real, but they noticed the redness in her face that said she was lying. Even though the subject never came up again, and the little elf named Cassandra that had been wreaking mischief on their home since they were toddlers still came back every year – they knew that the magic and hubbub of Christmas was nothing more than a lie.

So this year, they would live through their two younger siblings. They were the lucky ones. They had a four year old and a nine year old in the home, which meant they still got to visit Santa at the mall. They still had to make wish lists and lick an envelope so that mom could pretend to mail them to the North Pole. Sure, they pouted and acted like it was a chore, but deep down it kept a little bit of the magic alive for them. They still got to sip stifling hot chocolate loaded with gooey marshmallows on Christmas Eve, still never knew what they would be getting under the tree on Christmas morning. They still would be forced to have their picture taken with Santa, just as they did every year since they were one years old. They liked Christmas enough, but it certainly wasn’t the same anymore. Not without the magic.

So this year, they were content on making the magic come to life for their little sisters and standing behind their mom, who would not let go of the Christmas magic no matter how old they got. It is a strange time in adolescence when you are forced to give up childish things, and realize that you have been lied to, un-maliciously of course, for so long. Maybe, they thought – it was just a rite of passage or a cruel trick to not be allowed to believe in Santa forever. What else could be a lie? It is only safe to assume that children wonder this as well.

Was it really fair to pretend to believe in something for personal gains? It would be like being friends with a person at school simply because they had some THING to offer them? Was their mom telling them this as a threat? The girls didn’t believe that they would be left with nothing but a stocking full of coal simply because they had stumbled across the truth. The question beckoned them, and so on a cool and quiet evening, the older girls decided to understand.

“Mom, if I don’t believe in Santa, will you really not buy me present?” The teens snickered in the background. Mom catered to her coffee pot, never looked up and said, “I don’t buy the presents….Santa does.”

The older girls realized this would be harder than they thought and they pressed on. “Do you really want us to believe that there is such a thing as reindeer that fly around the world and deliver presents? Do you really think I can believe in a fat man, and elves, and the North Pole, and Frosty the Snowman? Really, mom….do you want me to be the laughing stock of the entire 8th grade?” “Wouldn’t it be easier for you if you could stop pretending for our sake?” “We would never tell our sisters?”

It seemed like a long pause, and the only sound was the clink of the spoon hitting the side of the coffee mug as she twirled her creamer. Then, with a single tear in her eye – she spoke…

“Believing is for YOU, not for me or for your little sisters. Learning to believe in magic, and in the good in life – is YOUR GIFT to receive, should you choose to accept it, here at Christmas and always. Because you always have a choice to believe!”

She took a sip of her coffee, the aroma of freshly ground beans wafted through the air and she said, “Believing makes it so! It REALLY is that simple!”

It was then and there, that they realized they had just received the best gift of Christmas, of life, that they could ever behold. And they believed.

Family Vacations! Well Worth the Investment

38 CLEVER WAYS TO USE REGULAR ITEMS IN YOUR HOUSE

Is Suicide the Answer to your Problems?

Jon Wurtmann - June 22, 2019 0
Engineered floors are the fastest growing segment of the flooring market, and for good reason. They are m

Bedbugs in the Bedroom